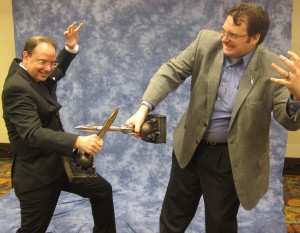 Brandon Sanderson won not one but two Hugo Awards at LoneStarCon 3, the 71st World Science Fiction Convention. His novella THE EMPEROR’S SOUL (Tachyon) will almost certainly be the first of many winners by Brandon of the most important awards in sf/fantasy, and he was also part of the team behind Writing Excuses, winner of the Hugo for “Best Related Work.”

Dan Wells, Mary Robinette Kowal, Howard Tayler and Jordan Sanderson are the other members of the Writing Excuses team.

We would like to congratulate and thank Jacob Weisman, Jill Roberts and the entire team at Tachyon for publishing THE EMPEROR’S SOUL in award caliber fashion. This is also a great night for Brandon Sanderson‘s editor at Tor, Moshe Feder, who discovered Brandon’s Elantris for Tor and helped set Brandon and this novella on the path to the winner’s circle.

Joshua has authored a blog post with some additional background about THE EMPEROR’S SOUL, which is also a current finalist for the 2013 World Fantasy Award for Best Novella. The winners for that award will be announced at the World Fantasy Convention in Brighton, England on November 3rd, and we will be keeping our fingers crossed until then!