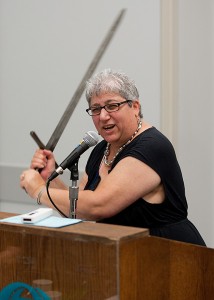 The fifth book in Jeri Westerson’s Crispin Guest series, BLOOD LANCE, is due out in the U.S. on October 16th, but those fortunate enough to have received advance review copies already have great things to say about it!

Kirkus Reviews says BLOOD LANCE is “a lively tale of historical interest smoothly combined with a worthy mystery” and have named it one of their “10 Hot Crime Novels for Colder Days” this Fall.

According to Publishers Weekly the “clever twists and convincing period detail make Westerson’s fifth 14th-century historical featuring disgraced knight Crispin Guest (after 2011′s Troubled Bones) one of her best.” And Library Journal praised all five of Jeri’s books saying, “these mysteries are always well crafted and complex, leading us into the culture of the era.”

With these stellar BLOOD LANCE reviews from the premier literary outlets in the bag we can’t wait for October to roll around to hear what the rest of her fans think!