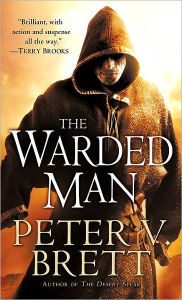 THE WARDED MAN (also called THE PAINTED MAN in the UK edition) has been published in 25 territories. Peter V. Brett will adapt the screenplay.

THE WARDED MAN takes place in a distant future, where demons who possess supernatural powers and burn with a consuming hatred of humanity have terrorized the night for hundreds of years, slowly culling the human herd that shelters behind magical wards—symbols of power whose origins are lost in myth and whose protection is terrifyingly fragile. Night by night the demons grow stronger, while human numbers dwindle under their relentless assault. Now, with hope for the future fading, three young survivors of vicious demon attacks will dare the impossible, stepping beyond the crumbling safety of the wards to risk everything in a desperate quest to regain the secrets of the past. Together, they will stand against the night.

Seldin’s producing credits include “The A-Team,” and he is also the president of Atlas Comics.

Futterman told Variety, “Peter has created a fresh and new look at humanity’s future, and has very quickly established himself as one of the hottest new talents in the sci-fi/fantasy genre.”