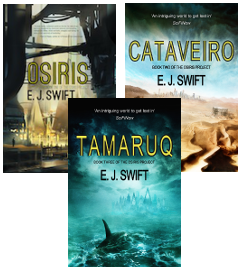 In her debut speculative fiction trilogy, The Osiris Project, E.J. Swift explores a post-apocolyptic world of isolated communities that know little of how the rest of the world fared in the Great Storm.

Set around four hundred years in the future, against the backdrop of a world radically altered by climate change, swathes of land are now uninhabitable. Civilization has been pushed to the poles, migration has redrawn borders and the powers in the north and south are locked in a silent technological war.

The trilogy begins with Osiris, a divided ocean city in the South Atlantic, whose citizens believe themselves the last survivors of the devastating Great Storms of half a century ago. With each novel, the canvas widens in a series that is part SF thriller, part ecological dystopia, an exploration of social and economic divides and a love story.

In OSIRIS, Adelaide is the black-sheep granddaughter of the city’s Architect. A jaded socialite, she wants little to do with her powerful relatives — until her troubled twin brother disappears. Vikram, a third-generation storm refugee, sees his own people dying of cold and starvation. He hopes to use Adelaide to bring about much-needed reforms — but who is using whom? As another brutal winter brings Osiris closer to riot and revolution, two very different people attempt to bridge the gap dividing the city, only to find a future far more complicated than either of them ever imagined.

In CATAVEIRO, a boat is shipwrecked on Patagonian shores, and rumors abound that it has come from the lost city Osiris, believed to have been destroyed over 50 years ago. Pilot and cartographer Ramona, recently returned to the island of Tierra del Fuego, has a broken plane, and the only person who can fix it for her is the Antarctican, Taeo, a political exile desperate to find a way back home.

In TAMARUQ, Adelaide Rechnov returns as she attempts to escape Osiris and her family’s power. But when a radio signal reveals that Osiris is not, in fact, the sole civilization to survive the Great Storm. As citizens of Osiris flee to explore the world that they thought had been demolished, mainland citizens make their way to the newly rediscovered island with nefarious plans in tow.