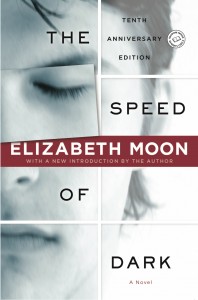 Every Friday Suvudu.com hosts a 50 page excerpt from a selected work of fiction, and this week they chose THE SPEED OF DARK by Elizabeth Moon!

Originally published in 2003, this Nebula Award-winning novel has been re-released in a special Ballantine Readers edition to commemorate its 10th anniversary. The new SPEED OF DARK release also coincides with National Autism Awareness month as its story centers around Lou Arrendale, an adult with Autism whose generation was the last to be born before medical and scientific breakthroughs corrected genetic defects in infancy.

If you’ve been curious to check out this high-calibre piece of fiction or are already looking for your first 2013 Beach Read, be sure to give these first fifty pages of THE SPEED OF DARK a try. Joshua guarantees you won’t regret it!