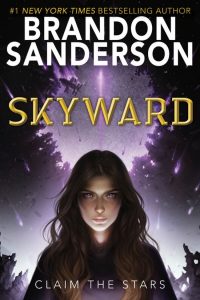 The first major reviews of Brandon Sanderson’s SKYWARD are here, and we are beaming!

Kirkus gives this series opener a starred review, saying, “Sanderson plainly had a ball with this nonstop, highflying opener, and readers will too.”

In its starred review, Publishers Weekly says, “Sanderson offers up a resourceful, fearless heroine and a memorable cast…set against the backdrop of a desperate conflict,” and calls it a “pulse-pounding story.”

The first installment in this new sci-fi YA trilogy tells the story of Spensa, a girl determined to become a pilot, defeat the alien race attacking Earth, and prove her father wasn’t a coward—and neither is she. SKYWARD publishes November 6, 2018 from Delacorte, with two more books under contract.