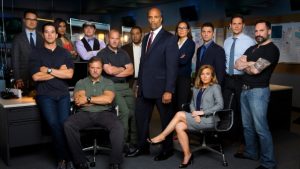 HUNTED, a new reality show on CBS, premiered last night after the AFC Championship Game. A total of 11.83 million viewers watched the premiere, according to Variety. The show follows nine pairs of Fugitives as they attempt to evade capture for a month while being tracked by an elite team of Command Center investigators and on-the-ground Hunters. JABberwocky’s own Myke Cole, author of the Shadow Ops series and former military cyber expert, is part of the Command Center investigation team.