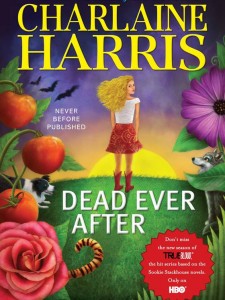 As of today, JABberwocky is excited to announce that DEAD EVER AFTER is currently the #1 bestselling book in not one, not two, not even three, but four countries! News of Sookie’s global domination is soon to be printed by the New York Times in the United States, the Sunday Times in the UK, the Toronto Star in Canada, and by the Herald Sun in Australia.

Last week copies of DEAD EVER AFTER, the thirteenth and final Sookie Stackhouse novel, by Charlaine Harris arrived on bookstore shelves all across the English-speaking world; and Charlaine’s wonderful and dedicated fan base responded, flocking to retailers in droves.

Congratulations to Charlaine Harris on her continued success with DEAD EVER AFTER, as we bid a tearful farewell to the Sookie Stackhouse novels.  But definitely not the end of Sookie; come fall the AFTER DEAD epilogue will reveal the fates of almost every character in the series.  Beautifully illustrated by Lisa Desimini, the cover artist for the entire series, it will make a wonderful holiday gift.