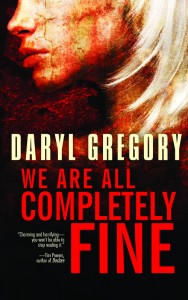 JABberwocky clients always rack up the award wins and nominations, and 2015 is proving to be no different!

First, Brandon Sanderson is the winner of the David Gemmell Legend Award for Best Novel for WORDS OF RADIANCE. This is the second time Brandon has won the award, after winning it in 2010 for the first Stormlight Archive novel, THE WAY OF KINGS. Brandon is also a finalist for the Geffen Award, given by the Israeli Society for Science Fiction and Fantasy, and the winners will be announced next month.

Second, Daryl Gregory’s novella WE ARE ALL COMPLETELY FINE has won the Shirley Jackson Award for Best Novella. This comes as no surprise, as it was already a finalist forthe Locus, Nebula, and Theodore Sturgeon Memorial Awards for Best Novella, and is currently a finalist for the World Fantasy Award. WE ARE ALL COMPLETELY FINE is also the inspiration for an upcoming TV series on SyFy.

Earlier this year, Nancy Kress won the Locus Award and the Nebula Award for Best Novella for YESTERDAY’S KIN, which is no easy feat, and we recently sold the Bulgarian rights.

Finally, Charlaine Harris’s #1 New York Times bestselling graphic novel CEMETERY GIRL is a finalist for the British Fantasy Award for Best Graphic Novel! The winners will be announced at an awards ceremony at FantasyCon on October 25.

We hope to have more good news in October when the winners of the British Fantasy Award and Geffen Award are announced!