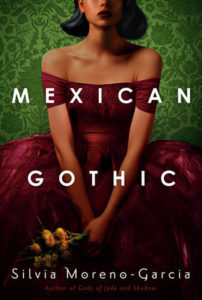 JABberwocky is so thrilled to announce that Silvia Moreno-Garcia‘s latest novel, MEXICAN GOTHIC, is #9 on the New York Times Bestseller List for fiction!

But wait, there’s more — It’s also #5 on the Washington Post bestseller list, is a featured title for Book of the Month Club, and is one of this summer’s most anticipated reads!

Stephanie Beatriz, star of NBC show Brooklyn Nine Nine and guest judge for BotM, “was captivated by the epic descriptions of the seemingly alive grounds and house, the terrifyingly familiar story of losing oneself to the rigid expectations of societal pressures, but also because I’ve rarely read or seen a story like this with this person as the hero. She is smart, ambitious, and often fearless in the face of overwhelming horror; this story was haunting in the BEST way!”

MEXICAN GOTHIC is available on Bookshop, Barnes & Noble, Amazon, Kobo, LibroFM, and your local bookstore. Don’t miss out on this summer’s bestseller!

MEXICAN GOTHIC follows Noemí Taboada who heads to High Place, a distant mansion in the Mexican countryside, after a desperate letter from her cousin. Though Noemí seems like an unlikely rescuer, a glamorous debutante with chic gowns and perfect red lipstick, she is not afraid of the house, which begins to invade Noemi’s dreams with visions of blood and doom. But there are many secrets behind the mansion walls, and as Noemí digs deeper, she unearths stories of violence and madness. Mesmerized by the terrifying yet seductive world of High Place, she may soon find it impossible to leave this enigmatic house behind.