NBC has released a poster for the upcoming MIDNIGHT, TEXAS series at San Diego Comic Con! The television series, which will premiere in late 2016 or early 2017, is led by Executive Producer/Writer Monica Owusu-Breen (Agents of S.H.I.E.L.D.), and Executive Producers David Janollari (Six Feet Under) and Nie 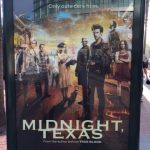 The show is based on bestselling author Charlaine Harris‘ seductive series, of the same name — and this is the third of Charlaine’s series to hit the small screen, after the Aurora Teagarden movies on Hallmark, and the Sookie Stackhouse series, which inspired HBO’s Trueblood.

Night Shift, the third book in the Midnight, Texas series, just hit the New York Times Bestseller list, and the series has received many great reviews. Romantic Times raved, “An unusual and highly entertaining new series … Harris has delivered a supernatural mystery with a decidedly creepy edge!” And in their article, 5 Reasons You Should Read Charlaine Harris’s MIDNIGHT CROSSROAD, Barnes & Noble praised its “unforgettable cast of characters … [and] extraordinary world building.”

Pick up your copy today, and read the series before the television release!