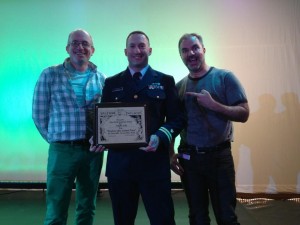 Even though it won’t be officially announced until this weekend, JABberwocky has received advance notice that Myke Cole‘s SHADOW OPS: CONTROL POINT has won the 2013 Compton Crook Award! Presented to a single author, the Compton Crook Award celebrates the best debut novel written each year.

When CONTROL POINT was first published by Ace in Feb. 2012, the book met with heaps of praise from fans, authors, and critics. In its end-of-year recap, Tor.com named Myke Cole’s book one of their “Reviewer’s Choice” picks for 2012 and its sequel, FORTRESS FRONTIER, was one of Fantasy Faction’s “Most Anticipated Fantasy Novels for 2013.”

Myke Cole’s authorial talents come as no surprise to anyone at JABberwocky, but we all are ecstatic that his debut novel is getting the recognition it deserves! This marks the second year in a row that a JABberwocky client has won the Compton Crook award following T.C. McCarthy‘s selection in 2012 for Germline.