Louis Charbonneau has written a prolific collection of novels that span the Science Fiction, Historical Fiction, Eco-Thriller, and Suspense Genres. This week, we want to bring your attention to his amazing Science Fiction collection.

Much of Charbonneau’s Science Fiction centers around dystopian worlds, and has a deep rooted thriller quality to it that leads to a truly immersive read. If you already love his Science Fiction, click here to check out his other genres! 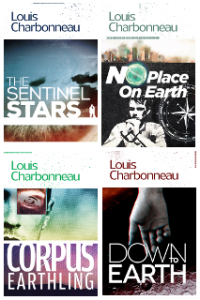 TINEL STARS, HTR-137 is content living out his life working off his government-mandated taxes, until one day, he decides not to show up, and shocking truths about the world he lives in are exposed.

NO PLACE ON EARTH follows Petr, a man who was raised by the government after his father was executed for treason. Still, Petr doesn’t harbor many hard feelings, until he discovers that his wife is expecting a child–something that is completely forbidden in his world. Suddenly, he is faced with a choice–join the rebel forces, or allow his new family to be executed for breaking the law.

Professor Paul Cameron realizes something is wrong with him when he begins hearing voices belonging to parasitic  aliens that have made their way into his head…When they start controlling his actions he is terrified, and it’s then that he realizes that he might not be the only one. Any human he sees could be harboring these increasingly powerful beings, and nobody knows yet what it is they want.

In DOWN TO EARTH Emergency Landing Station 17 was operating perfectly. It provided its inhabitants with holographs of Earth that are so real that the workers who stayed there for years at a time sometimes forgot they are even in deep space. But all of this changed when electronic glitches began, and as they intensified, it became all to clear that they were not accidental.