We’ve added two classic horror anthologies to our Ebook collection just in time for Halloween next week. DARK DELICACIES and DARK DELICACIES III: HAUNTED join the previously available DARK DELICACIES II: FEAR in our catalog, and for one week only we’re dropping the books’ prices from $9.99 to $2.99.

If you crave a few extra frights on top of the Dark Delicacies anthologies, we’re also offering several other horror ebooks at reduced prices by Aurora Award and Bram Stoker Award-winning authors. These books will be on sale from October 26th to November 2nd, and at a perfect price to add to your digital library and read again and again (and again, and again, and again)… Pick them up at your e-tailer of choice and enjoy! 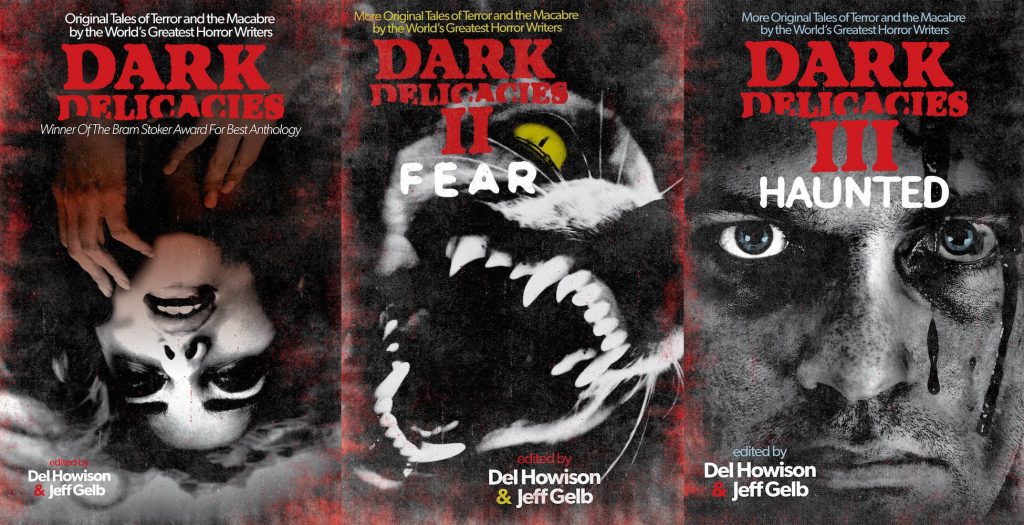 DARK DELICACIES: Bram Stoker Award-winning editors Del Howison and Jeff Gelb have gone back to the roots of our fears with a collection of horror of all types, new tales by the current masters of horror. Each story is a different disturbing dark narrative so that you never know what is coming for you next. After all, we really don’t know what is hiding in the dark, do we? Includes stories by Clive Barker, Ray Bradbury, Ramsey Campbell, Nancy Holder, Richard Laymon, Brian Lumley, Joe Lansdale, Whitley Streiber, F. Paul Wilson, Chelsea Quinn Yarboro, and many more!

DARK DELICACIES III: HAUNTED: Haunted explores the emotions of obsession, desire and pain. We are all haunted by something. The horror is in how we deal with it. Includes stories by Kevin J. Anderson, Clive Barker, Michael Boatman, Heather Graham, Richard Christian Matheson, David Morrell, Chuck Palahniuk, Victor Salva, Simon R. Green, and many more!

EDO VAN BELKOM‘s BLOOD ROAD: Amanda Peck is stuck in a dead-end job, lives with a deadbeat boyfriend, and is dead set on changing her life. With no thought about what tomorrow might bring, she packs up and runs. She hitchhikes west by accepting rides from truckers, but what she know is that prowling the enedless miles of asphalt on eighteen wheels is a vampire who’s already claimed the lives of five women, leaving their mutilated bodies in his tracks like so much roadkill. Will the next truck take her on the ride of her life, or will it take her on a nightmare journey that can only lead to the end of the road?

FEAR ITSELF, edited by Jeff Gelb: Master editor Jeff Gelb asked 21 giants of the horror genre to tell us about their own worst nightmares, and this intimate anthology was the result. Stories from Joyce Carol Oates, Graham Masterton, Max Alan Collins, Jack Ketchum, Nancy Collins, and John Shirley will chill you to the bone.

Don’t forget to sign up for our newsletter for occasional updates and author news!