Silicon Valley readers are in for a treat: Benjamin Parzybok‘s SHERWOOD NATION 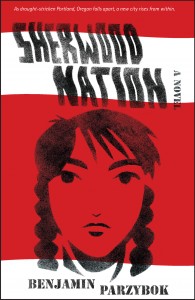 (buy|reviews) has been named a Silicon Valley Reads pick for 2016, alongside Emmi Itäranta’s Memory of Water.

The theme for the year is “Chance of Rain?” and we think SHERWOOD NATION is a perfect fit. The novel deals with the aftereffects of a severe drought in Portland, in which a micro-nation takes rise. It’s absorbing, prescient, and one you’ll want to read with a glass of water handy!

Silicon Valley Reads is an annual community reading program that serves the communities of Santa Clara County, California (including San José, Santa Clara, Palo Alto, Cupertino &c.). It grew out of a more traditional “one book, one community” program into one with greater breadth and depth, including a variety of community events, panel discussions, and the like.

Ben Parzybok will be participating in between 12–20 community events in the Silicon Valley over the course of 2016. He has more on his blog, and if you’re a Santa Clara resident, be sure to bookmark him for updates as the calendar of events expands.