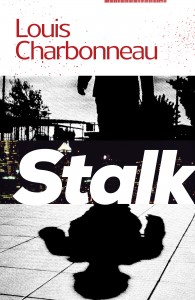 Publishers Weekly reviewed both book and author favorably, saying, “Charbonneau supplies believable characters and action aplenty.” In addition, STALK, along with several other of Charbonneau’s thrillers, was chosen as a selection for Reader’s Digest Condensed Books. The unabridged version is now available as an eBook on at all major ebook retailers, featuring brand new cover art.

STALK tells the story of Barney McLean and his girlfriend Angie. Each hiding under an assumed identity unbeknownst to the other, their peaceful Southern California life is shattered by their secret pasts as they dodge pursuers on both sides of the law. STALK is a book well worthy of a first, second, or fourth read. Fans of classic pulp, suspense, and thrillers will be sure to appreciate Charbonneau’s masterful writing.

You can get your free copy for review at NetGalley!