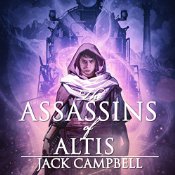 Audible.com has completed their July Customer Favorites round-up, and we’re proud to see that THE ASSASSINS OF ALTIS, the third novel in the Pillars of Reality series by New York Times bestselling author Jack Campbell, is one of them! The Pillars of Reality steampunk/fantasy series is an Audible bestseller, and some of the fastest-selling Audible Studios titles ever.

THE ASSASSINS OF ALTIS

continues the story of Master Mechanic Mari and Mage Alain as they search for the key that will allow them to save the world from the iron-fisted rule of the Mechanics Guild and Mages Guild. In addition to foiling the death traps set up by their own Guilds, they must escape the merciless barbarians and Imperial Legions hellbent on wiping them off the map. And then they must survive the deadly Assassins of Altis.

The first wo books in the series, The Dragons of Dorcastle

and The Hidden Masters of Marandur, have been very well received by readers. Book Lover’s Life called Dorcastle “a fantastic read” and The Arched Doorway praised it for being “the perfect mix of steampunk and fantasy.” All Things Urban Fantasy rated it 5/5 bats, saying how much they loved the “intense battle and actions scenes,” which long-time fans of Campbell’s military science fiction Lost Fleet and Lost Stars series already know is one of Campbell’s strengths.

Haven’t read the first two books yet? Don’t worry! The Dragons of Dorcastle and The Hidden Masters of Marandur are both available in audio, ebook, and print formats. There’s never been a better time to start!